As Accountants we’re renowned for liking numbers. So, what better way to feed our addiction than by looking at how us, as Australians pay tax. The Australian Bureau of Statistics has recently released the information for the 2018 financial showing the amount each level of government earns in taxes.

Taxation Revenue by Level of Government

A feature of the Australian federal system is that the Commonwealth Government levies and collects all income tax, from individuals as well as from enterprises. It also collects a portion of other taxes, including taxes on the provision of goods and services. The revenue base of state governments consists of taxes on property, on employers’ payroll, and on the provision and use of goods and services. The sole source of taxation revenue for local governments is taxes on property.

The table below compares taxes received by all levels of government 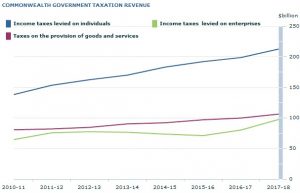 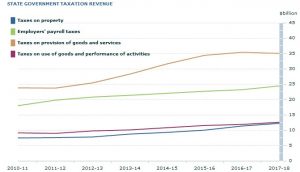 As the above graphs demonstrate, the amount of income generated by the various taxes across all levels of government has been progressively increasing over the years. There are many reasons why these levels have increased, not the least being the increase in the population.

Posted by Initiative Team on Friday, October 25th, 2019 in News